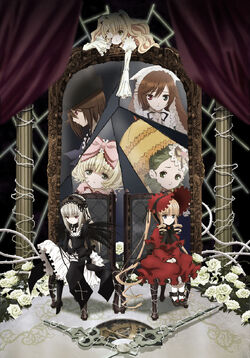 Rozen Maiden (2013) (ローゼンメイデン "Rozen Maiden"; released overseas with the subtitle Zurückspulen) is an anime in the Rozen Maiden franchise. It does not follow the two previous anime, but instead adapts the beginning of the 2008 manga.

Rozen Maiden Zurückspulen was revealed as new series in November 2012, set to premiere in July 2013. The art style, as well as the storyline are closely following the currently ongoing manga. The anime is be directed by Mamoru Hatakeyama at Studio DEEN, with Tomomi Mochizuki serving as the script writer. Shinkichi Mitsume returned as the music composer for the series, as well as Ali Project, once again performing the opening theme. Most of the cast from the previous anime returned to reprise their respective roles.

The story closely follows the story of the second manga and does not continue the story for Träumend.

Rozen Maiden Zurückspulen starts off with a quick recap episode for the events of the first manga. After this first episode, the anime begins closely adapting the second manga up to Tale 25 with further events up to Tale 43 being touched on in the final episode.

In another world where Jun responded that he would not wind, he is seen as an adult attending collage with a part-time job. This Jun becomes involved with the events of the Wound World when the Jun of that world reaches out to him via text message. Unwound Jun becomes tasked with creating a replica body for Shinku. He succeeds this and Shinku ends up living with him for a bit. Shortly after, Suigintou ends up finding his living quarters on accident and stays with them too, although she would rather be back to searching for her master, Megu Kakizaki. During this time, Jun becomes involved with Saitou, his coworker, and a stage play she is an actress in.

Unwound Jun becomes a pawn for Kirakishou when she tricks him into building another doll. On the night of the play's first premiere, Suigintou brings along the new doll body to it. Time stops as the overlap of worlds strikes and the spare body becomes inhabited by Kirakishou. Shinku and Suigintou fight against Kirakishou but Shinku holds back, thinking that the body is Hinaichigo's. Suddenly, Suiseiseki crashes through a skylight and protects Kirakishou, confirming that the body actually belongs to Souseiseki. The four dolls then attempt to get Jun to make a contract with one of them but during this, Jun accidentally forges a contract with Suiseiseki's ring. However, this ring is not Suiseiseki's ring, but actually Souseiseki's. Kirakishou is kicked out of Souseiseki's body and the body reverts back to her form. Suiseiseki gives Souseiseki her Rosa Mystica

In the N-Field, Suigintou and Shinku meet Souseiseki again. Meanwhile, the Juns of both worlds meet. The unwound Jun reassures the wound Jun of his future and in the process he has a personal breakthrough and realizes that the world can be what he wants it to be. He and Kanaria head off to meet up with the dolls and wound Jun heads off to get Shinku's real body back. Kanaria breaks the large crystal the other dolls were in and the group is faced with a large clock. Souseiseki strikes a deal with Suigintou to get her rosa mystica back so she and Suiseiseki can fix the clock so time can start again. During this, Kirakishou attacks them again but is ultimately no match. Time resumes and Shinku falls apart. The wound Jun returns with Shinku's real body and together with the unwound Jun, they bring her back. The two Juns head back to their respective worlds.

Unwound Jun finds that his world once again holds no trace of the Rozen Maiden and the play continues as normal. In the wound world, wound Jun returns to school. The dolls discuss how to best keep their masters safe from Kirakishou. Micchan is abducted by Kirakishou. Jun has an accident at school and as a result falls into a coma. The dolls decide to enter the N-Field again, but know this is risky so they contact the unwound Jun again for his help. He agrees. 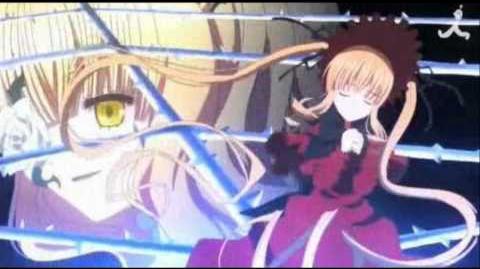 Retrieved from "https://rozenmaiden.fandom.com/wiki/Rozen_Maiden:_Zurückspulen?oldid=8933"
Community content is available under CC-BY-SA unless otherwise noted.